Watches In Space: A Guide

For as long as we can remember we have been fascinated by space, as well as the watches that have accompanied the astronauts on their pioneering missions.

Now 50 years since mankind first stepped onto the moon, we’re celebrating the famous watches that have been to space, including the iconic OMEGA Speedmaster Moonwatch.

On 20th July, 1969, American astronauts Neil Armstrong and Edwin “Buzz” Aldrin became the first ever people to set foot on the moon, as part of NASA’s historic Apollo 11 moon landing.

The watch chosen to be part of this iconic mission? The OMEGA Speedmaster Professional, now known as the Speedmaster Moonwatch.

It became the first watch on the moon, worn by Buzz Aldrin as he took mankind’s first steps on the lunar surface.

Since then, the Speedmaster Moonwatch has been on all six lunar missions and is the only watch certified by NASA for use on spacewalks.

It’s truly a watch like no other, with an incomparable story to tell. Own a piece of history and create your own legacy with this unbelievable timepiece.

Whilst OMEGA and their legendary Moonwatch takes Centre stage when it comes to space exploration, it’s not surprising that other watch brands have been part of many space missions; selected for their ruggedness and extreme precision.

What Are The Key Features of a Space Watch? 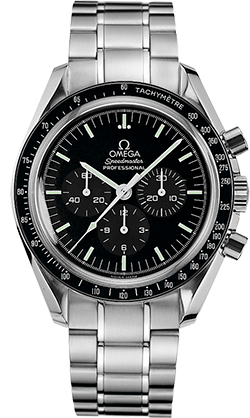 Specified by NASA for use on the original Moonwatch, although it is more prone to scratching than sapphire crystal, it doesn’t shatter on impact making it much safer in zero-gravity environments.

In addition to the stainless steel and NATO bracelets, this Moonwatch Professional is equipped with a fabric strap for astronauts.

In the early days of space exploration, manual winding movements were preferred due to the unknown effects of microgravity environments on automatic movements.

Like pilot’s watches, high-contrast dials increase the legibility of the watch, whilst bright superluminova coating ensures the watch can be read in all conditions.

The chronograph function allows complex timing operations to be performed.

The Astronauts And Their Watches

Whilst the astronauts themselves have made huge leaps for mankind, the space programme has also witnessed many horological firsts.

The first American to orbit our planet, on his wrist was a modified Heuer stopwatch - the first Swiss Made timepiece to orbit the Earth.

Following OMEGA’s first trip into space in March 1965, the OMEGA Speedmaster made history on the wrist of Ed White when he became the first American to spacewalk on his Gemini 4 mission later that year. The Speedmaster remains the only watch to be officially certified for use in open space.

On board Apollo 8 in December 1968, this three-man crew became the first people to leave Earth’s orbit, before orbiting the Moon and returning safely to Earth. Paving the way for the Apollo 11 mission less than a year later, the crew were also the first humans to see the Earth as a whole planet, to orbit the Moon, to witness an Earthrise and to see the dark side of the Moon.

On the 16th July, 1969, the world was glued to their screens as the astronauts of Apollo 11 prepared to land on the moon. Whilst Neil Armstrong made history by becoming the first human to walk on the moon, the OMEGA Speedmaster became the first watch on the moon on the wrist of Buzz Aldrin - Armstrong had left his Speedmaster in the lunar module.

It was this historic mission that earned the OMEGA Speedmaster the nickname ‘The Moonwatch’, perhaps making it the most recognisable of all the watches linked with space.

Houston we have a problem

Two days after launch on April 13th 1970, the crew of Apollo 13 had their hopes of landing on the moon crushed when one of their spacecraft’s oxygen tanks burst.

Using lunar gravity to propel the crippled spacecraft back to Earth and without any of their normal navigational equipment, they timed a 14 second engine burn with their OMEGA watch, correcting their course and enabling them to get home safely.

Part of the fourth manned lunar landing on board Apollo 15 in 1971, Dave Scott and his fellow astronaut James Irwin remained on the Moon for 66 hours and 54 minutes, setting a new record for lunar stay time.

Due to damage to his official watch, Dave Scott wore his own Bulova watch on his second spacewalk, making it the first privately owned watch to walk on the moon.

The first British European Space Agency (ESA) Astronaut, Tim Peake left Earth for the ISS on 15th December 2015. Spending over 185 days in space, he took part in the first spacewalk outside the ISS by a British astronaut on 15th January 2016.

During his mission, Peake wore the OMEGA Speedmaster Skywalker X-33. This was the first space watch designed in collaboration with astronauts, and is the watch which all ESA astronauts are issued with.